A couple of years ago, I bought "The Penguin Book of Norse Myths - Gods of the Vikings", by Kevin Crossley-Holland. Myth # 12 in the book was "The Lay of Grimnir", (in Norse, "Grimnismal".)

As the author wrote, "Grimnismal provides the only detailed account of Valhalla in Old Norse Poetry". From those details, emerged the little known statistic of the five hundred and forty doors of Valhalla.
At the Final Battle (Ragnarok), eight hundred warriors were presumed to have marched from each door. ... 432,000 warriors, folks!
I liked the idea, but five hundred and forty?? My guess is that Valhalla was particularly long.
Yet if one had to swear by some statistic, you must admit that "By The Five Hundred and Forty Doors of Valhalla" sounds pretty good!

( And I thoroughly recommend reading that Penguin book, if you're keen on the Norse mythology! ) 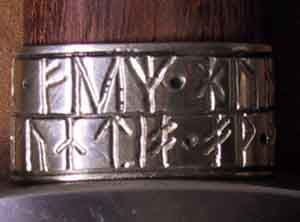 The runic used was a mixture of Scandinavian and Gothic, and done literally letter for letter from my attempt at the Norse phrasing of "By the Five hundred..." (Worked from a Scandinavian version of "Grimnismal").

All this may be close to the mark, or veering wildly off the course, regarding accuracy, but the enthusiasm and the 'inherent meaning' that comes with it, is the important thing I believe!