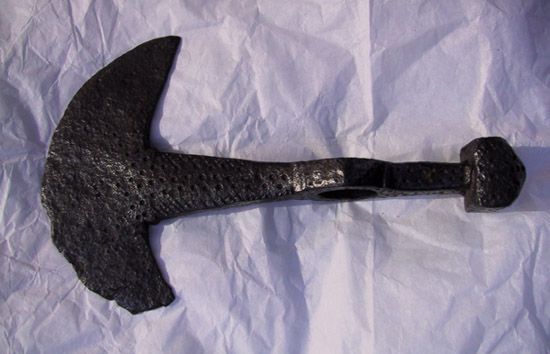 Originally excavated at Tewkesbury, England, the dealer I purchased this from (early July '01) had bought it from a Devon farmer, at a London antiquities/arms fair.

The farmer, a metal detecting enthusiast had found it at Tewkesbury. Taking it to his local museum, it was then identified as being a battle-axe, of a period circa 1375 - 1450 AD, and possibly southern German or Flemish of origin.

It is made of iron, with markings (as detailed in the image below), its size would have been 5" in height (less a fraction for the breakage/erosion on the lower part) and it is 8" long.

The Battle of Tewkesbury occurred in 1471, and it is possible this weapon belonged to one of the groups involved. 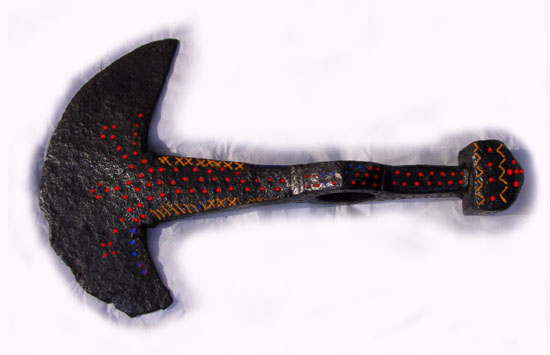 I am attempting to find out which group might have used it - there are a few possibilities - that it may have been a horserider's axe, or part of a poleaxe, or just a small battle-axe, are suggestions that have been brought up, and any further details I will add to this as they arise. (Thanks to the kind folks at Netsword and the Swordforum!)

I am interested by the simple markings on the axe as well, and am hoping this might help categorise it further. The search will continue!

Okay, the consensus so far is that it was possibly a horse-rider's axe , or a secondary weapon to an archer/foot soldier. The length of the original haft would most likely be no longer than 22"/55 cm - possibly closer to 16"/41 cm.

The markings are commonly attributed to a Norse style, which is quite possibly a style that descended to the areas where the museum considered it was made.

Any other notes / information will also be considered useful. Contact here! 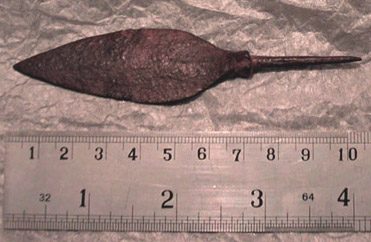 Also... this time from a "dig" in Bath, England. The dealer (the same one who brought back the axe above) purchased this at a weekend arms fair in Alexander Palace. It was described as a Medieval spear head, but there is no other information I can go by, to confirm the accuracy of this. It looks smaller than I would expect for a spear head, perhaps a javelin? I wonder if it could be a hunter's spear head, as different to a militarial use. It is quite light and thin. It has also been recently suggested to me, that it could be an arrowhead instead. (There have been some pretty big bows around, in history!)